ONE week until my family comes and 15 days until I’m back in the US! Where did the time go?! These next few days will be really exciting and really sad too. This has been the most amazing experience.
So these past two weekends it has been fun to be back home in London. Two Thursdays ago was class, class and more class. But, it was absolutely glorious outside!! Not only did it feel like spring, but it almost felt like summer:) We walked across Hyde Park to our religion class in only our t-shirts or thin sweatshirts. Oh and you can’t forget we were wearing our sunglasses the whole time. After class, we rode bikes in the park and it was one of the most fun things I have done here!! It was like I was doing something from out of a movie. The sun was shining, the flowers were all in bloom and the park was crowded with people. So much fun!! 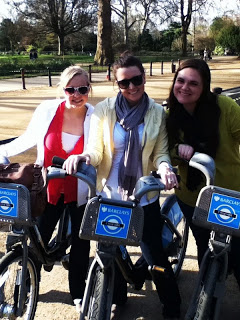 Friday was just as beautiful outside!! I wanted to stay in the park all day and never leave. Kins and I went on a run in our shorts and t-shirts. At the end, we found a grassy spot in the sun and laid out. Haha let’s just say I am so white from being over here in zero-sunlight-city that I am pretty much transparent. So some sun did me some good:) At 1pm the bus came to take us to the birthplace, home and grave of Shakespeare, Stratford upon Avon. This place is Shakespeare central. It is a really nice little touristy area with cute restaurants and shops, a river running through the middle and its really well kept. We visited the birthplace of Shakespeare- the little house was so cute! We walked around town and then we went to the Royal Shakespeare Company’s production of King Lear. This was the best acting I have ever seen in my life. But the play was almost 4 hours long and had some really weird parts. So, though I appreciated the acting, I wasn’t the biggest fan if King Lear. Our Bus ride home was our last:( so many good times on that bus. 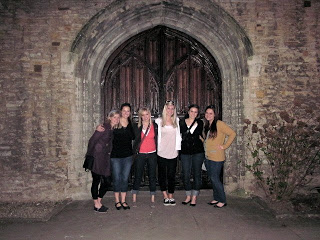 Saturday was great. I went on a long run with Paige to regents park (so beautiful right now!) and went on a walk around the city with my girls. We had so much fun; I love them so much. We went to Borough Market, which is a strictly food market and it was a fun atmosphere. I bought a bag of yogurt covered dried bananas and yogurt covered almonds- my new addiction!!! We walked across the tower of London and along the Thames river. It was a grungy T-shirt day and we loved being comfy. 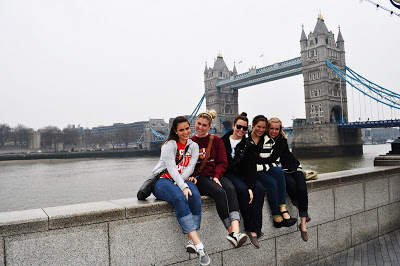 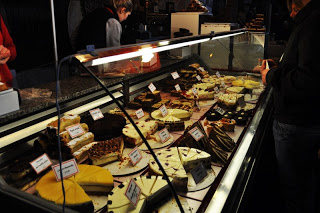 Last week it was so great to just be in London; traveling tires you out! Monday night we all went an saw Billy Elliot. It was a great production and really entertaining! (a little too many swear words for my taste but the dancing was AMAZING!!!)
Tuesday I went with liz to the Tate Modern and Saatchi art galleries. Surprisingly, I really liked the Tate Modern- Santa Fe must be rubbing off on me. For dinner we went out and got our favorite thing called a Shwarma from a tiny Kebab place on the corner. Its just a pitta pocket filled with chicken, sauce and your choice of veggies. We love it. After dinner, we went to the England vs Ghana football (soccer) match at wembley stadium. Wow! I’m so glad I got to experience football in Europe; it is CRAZY!! It was a packed stadium of 80,000 people.  The fans are extremely enthusiastic for their teams- even though it was only a friendly exhibition game. Paige, Ashley and I realized that 80,000 people were going to try to leave the stadium at once and that we’d be waiting in line for hours to get on a tube home so we decided to leave 5 minutes early. It didn’t look like anyone had left the stadium yet, but when we got outside it was already a sea of thousands heading to the tube station. So we decided “why not burn some calories?” and we ran/jogged past literally thousands of people to the tube stop. It was actually really fun dodging people, we were laughing pretty hard. But when we got on a tube home really easily we were happy we had left. It was such a fun night!! I’m so glad we got to go. 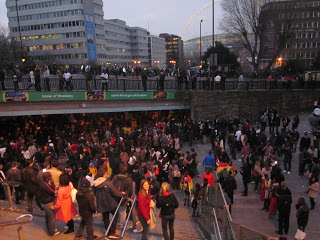 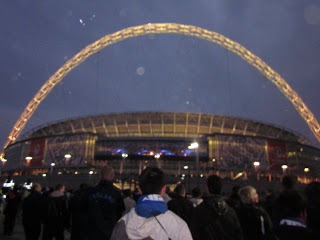 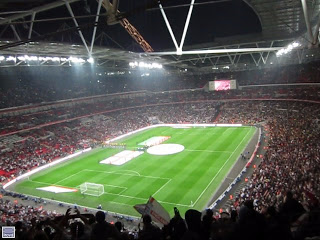 Wednesday night we went to the Houses of Parliament and had a lecture/fireside with a member of Parliament. It was really interesting to listen to how greatly UK government differs from the US government. Thursday was spent in class like always. In all honesty I can’t remember exactly what I did last weekend. That’s why it’s so bad of me to get behind on blogging. But, a lot of my time was spent in the park enjoying the sun. Kaylee and I had a nice picnic in the park on saturday then we went to the Sloane Square Market and Abbey Road. Abbey Road was… just any normal road, but not because its ABBEY ROAD. We had a lot of fun trying to get the classic pic crossing the street. There were a lot of failures but I think we got a few good ones. The cars were not very happy with everyone stopping in the sidewalk to take pictures; it was funny and entertaining. 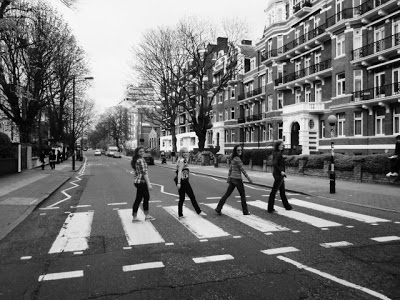 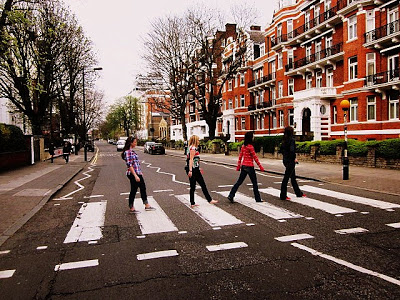 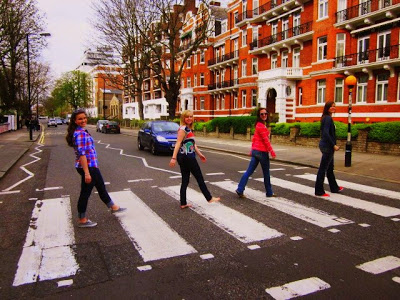 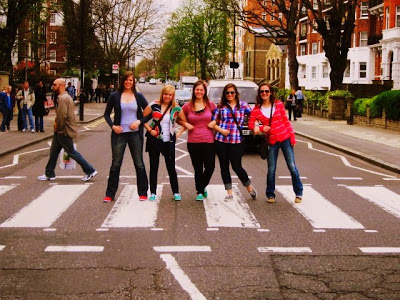 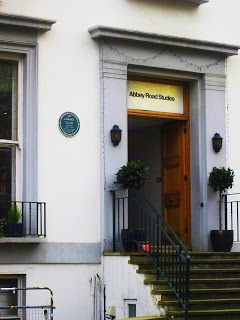 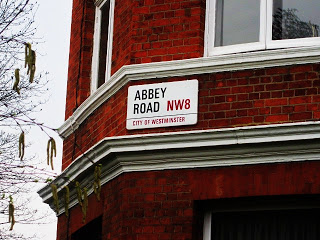 After Abbey Road, Kaylee and I ventured over to Camden Market for some cheap fruit. Well we found the cheap fruit and it was really cheap! We’ll just say that we found out why it was so cheap as soon as we bit into it. ha but it was a fun adventure.
This week has been my last full week in London as a student at the BYU center and I can’t believe it!!! I am really  so so so sad. Monday the whole program went to see the play Children’s Hour starring Kiera Knightly and Kate Moss. The acting was so amazing. The story was a little creepy/weird, but it was good. After the play we went to the back door and wait to see Kiera leave. I have never done anything like that and it was funny. Lots of paparazzi, but in the end we got to see her and she signed a few of our tickets. We had fun with it 🙂 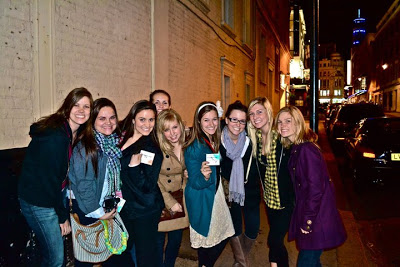 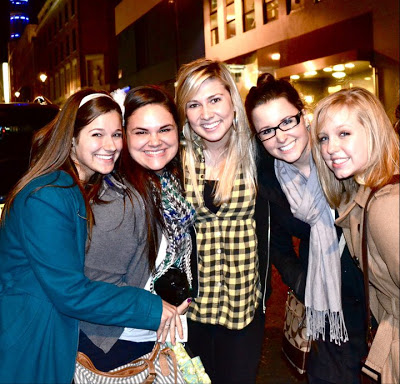 Tuesday was our first day of rain in the longest time! I kind of liked it. I just wish we wouldn’t have had our trip to Greenwich on a rainy day. Greenwich is a really pretty area South of the Thames. My favorite part was the park that looked over the Thames and the city. It would have been a lot more enjoyable if it would have been warm. 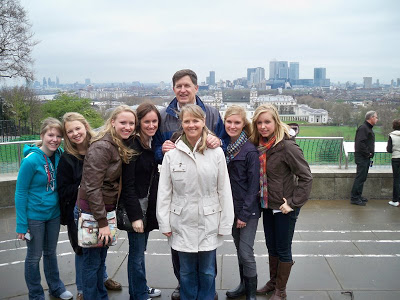 Wednesday was AMAZING!! I had a great run, went to a market, attended evensong at St. Paul (gorgeous) and then for possibly the best thing I’ve done in London– Front row Les Miserables tickets!!!!!! AHHH nothing can describe how wonderful this was. Pure perfection!! I didn’t think that it could get any better than when I saw it the first time, but it did! Sorry if these pics are boring but I kept taking them because I was in LOVE:) 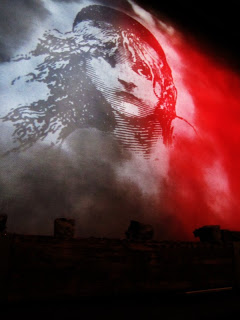 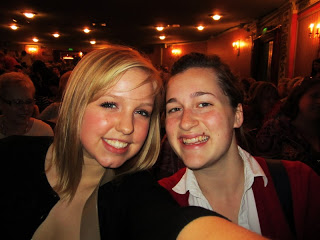 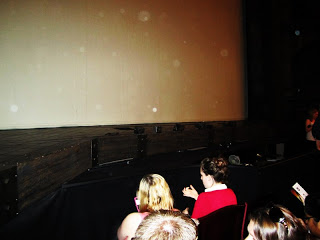 The days are just getting better!! Today I had two of my four final and they were great!! Even finals are wonderful here:) It was 70 degrees here today which will make any girl happy. I loved my run in the park, laying in the sun, walk to religion, walk to oxford circus and shopping. It was a great day that got even better. We went down to Big Ben and the Eye to see them all lit up and just walk around together in the great weather. We took lots of pics and then we road the London Eye. It was SO fun!! We got our own pod, just 8 of us, that never happens; and the views were gorgeous! We reminisced about all our times here in London, what we’ll miss and what we wont, and our favorite moments. I got a little teary eyed; I’m not ready to leave. It was a perfect night. 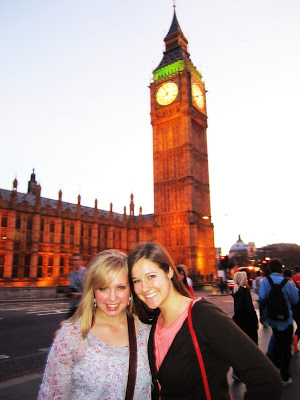 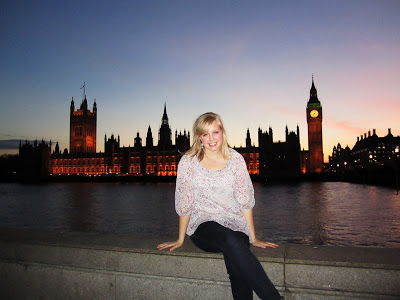 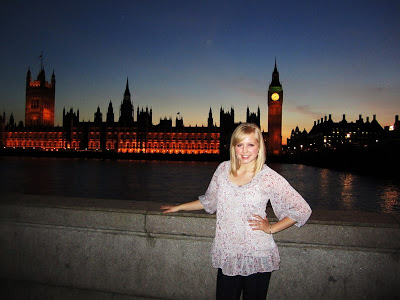 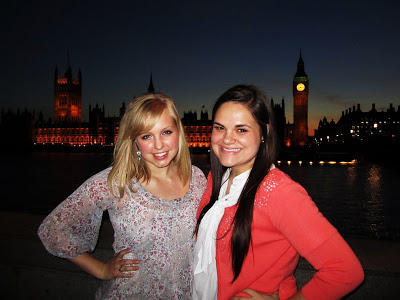 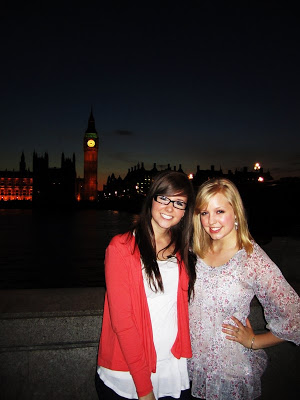 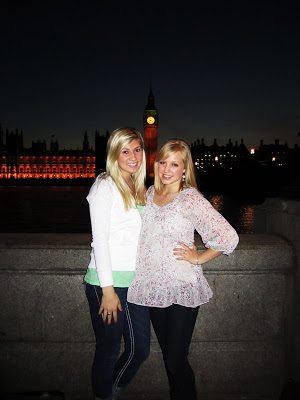 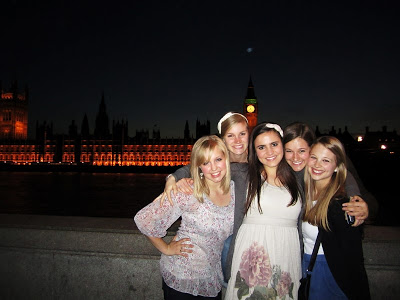 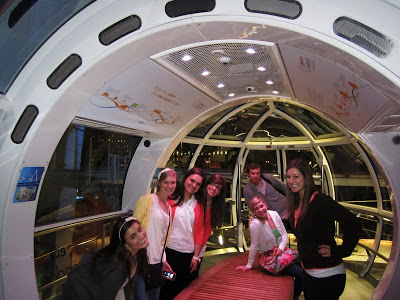 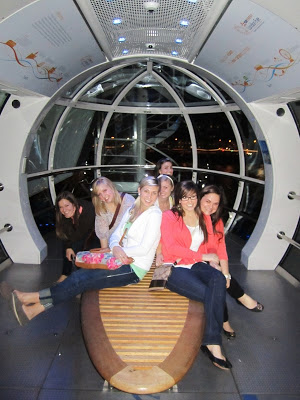